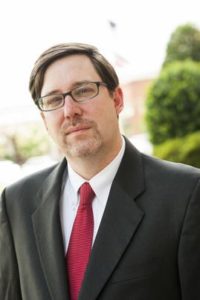 Hernando attorney Christopher E. Kittell is an experienced trial lawyer who practices law at the Kittell Law Firm in Hernando, Mississippi.  He received his BBA in Computer Information Systems from Delta State University in 1996 and his JD from the University of Mississippi School of Law in 1999. Chris was a member of the International Legal Fraternity of Phi Delta Phi while attending law school at Ole Miss.  Chris is happily married to his wife Jennifer and is the proud father of three children.

Kittell’s trial experience and reputation has garnered him multiple honors.  He was named to the impressive Nation’s Top One Percent list by the National Association of Distinguished Counsel in 2015 and received the Client’s Choice Award from Avvo in 2014.  He was named one of the Top 10 attorneys in Mississippi by the National Academy of Personal Injury Attorneys in 2013 and was given the top attorney ranking of “AV” by Martindale Hubbell in 2014 and every year since.  He was named to the National Trial Lawyers’ list of Top 40 under 40 Trial Lawyers in Mississippi in 2012. He has also been named a “Rising Star” by Mid South Super Lawyers magazine for 2010 through 2013.

Chris has received nationwide notoriety for his practice regarding the FCRA.  Chris was involved in a $4.47 million verdict against Trans Union, at the time the largest verdict against a credit bureau.  Chris represents consumers in FCRA cases across the nation and is often associated by lawyers around the country less familiar with the inner workings of the credit reporting industry. Chris has represented consumers in FCRA litigation in more states than he hasn’t.  Chris also obtained a $2,273,000.00 verdict for a plaintiff in a slip and fall case in the Circuit Court of DeSoto County, Mississippi in August, 2006, which is believed to be the largest personal injury verdict to date in DeSoto County, Mississippi.

Chris has also enjoyed lecturing to both current and future lawyers, including speaking at local Continuing Legal Education seminars in Mississippi, lecturing for consumer law classes at the University of Mississippi School of Law, and lecturing multiple times at the National Association of Consumer Advocates’ FCRA Conferences and has served on the Conference’s steering committee since 2004.  Chris has written articles regarding his practice in the area of the FCRA, which have been published in The Consumer Advocate, the national publication of the National Association of Consumer Advocates.